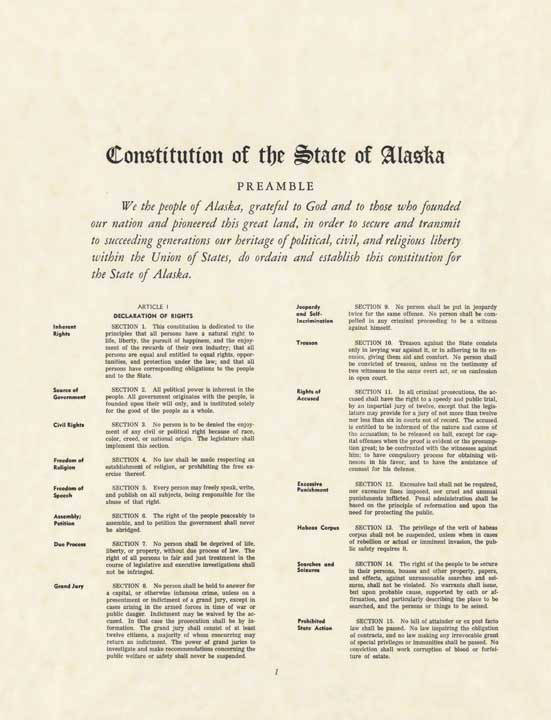 Article XIII of the Alaska Constitution contains provisions for amending the state constitution and for calling a constitutional convention.   Section 3 requires the lieutenant governor to place the following question on the general election ballot no less than 10 years after the previous vote:

Shall there be a Constitutional Convention?

The most recent time Alaska voted on this was in 2012, which lost roughly 2:1 against with nearly 270,000 voting.  The question was on the ballot five previous times and failed four of them generally close to the 2:1 split against.  It narrowly passed the first time on the ballot in 1970, but opponents to the convention took the matter to the state courts and found a judge who decided the language on the ballot was misleading and threw out the results.  The measure failed two years later in 1972 at close to what became the historic 2:1 average against with around 85,000 voting.

The next time the measure will be on a statewide ballot will be in 2022.  What sort of Alaska will be voting on it then?

Will we have a former governor who was recalled for doing his constitutional duty to control state spending?  Will we have a completely rewritten state election law via creative judicial review of a ballot initiative that now allows initiatives to contain multiple topics (in this case between 3 – 7 different items)?  Will we have legislative majorities busily spending the PFD, all Permanent Fund earnings, drilling down into the Fund itself?  Will we have chased the last of the major oil producers out of state with new taxes?  Will commercial fishermen be sitting on millions of pounds of salmon that are no longer competitive in the worldwide salmon marketplace?  Will we continue to fiscally support communities who actively fight roads and bridges?  What about the Bush?

There are some people out there that believe it is time to deal the cards once again, shake the game board and start anew.  Indeed, one of the political gifts President Trump has is the ability to shake the box with intractable political problems and start over.  Do we need to do that up here?

Granted this is high stakes poker.  We may very well lose everything.  While the most prudent path may continue fighting this incrementally for the next several decades, we still face the possibility that the political left, public employee unions, greens and other rent seekers may win it all if a convention is called.  Remember, the enemy always gets a vote.

What are the large, intractable problems here in Alaska?  A short list for your consideration:

How do we solve these?  Addressing them individually is a long, hard political slog, and a convention may very well be an acceptable alternative path.  But the risk of a failure to do it right may be far too high to even consider much less to embrace.

Our next opportunity to make that choice will be November 2022.  And that discussion, wherever it leads needs to be joined.