I received the following response from Rep. Chuck Kopp (Dist 24) to my piece on his proposed move from defined contribution to defined benefit for police and firefighter pensions.  While I disagree with his conclusions, his response is presented in toto.  Should this take place, there is no way the rest of the public employee union members won’t demand the same treatment and elect legislators and governors who will make that change.  Once again, we are smartly back at the point where we have a fiscal hole and are bringing in an excavator. – AG

My apologies for replying a second time to your e-mail about HB 79, the peace officers and fire fighters pension bill.  But my last e-mail included a graph that because of the vagaries of e-mail did not transmit.  I have also expanded slightly the narrative just before that chart to help explain it more fully.

I wanted to take a moment to respond to your e-mail.  First, thank you for your e-mail, dialogue on important public policy issues contributes to good decisions and I am happy to share a little bit more on HB 79.  To be sure, it is longer than a lot of legislation and is a complex bill and easily misunderstood.  I would like to clarify some points about the bill from your e-mail.

The bill does not blow up the budget.  The bill proposes a new pension tier for peace officers and fire fighters.

The proposed new plan itself is self sustaining primarily because the bill’s proponents (the peace officers and fire fighters) have agreed to a less generous retirement than prior Alaska pension tiers (tiers 1 – 3).  Unlike prior pension tiers within PERS, this plan proposes the same medical benefit as current Tier 4, which is not a fully paid health plan, but a fund paid for by the employee that allows the retiree to purchase the state health insurance, or use the fund to buy a different health plan, or pay directly for health care needs.  Similarly, unlike prior pension TIERS, this plan proposes no cost of living adjustment to retirement benefits.  Also, the plan gives the Alaska Retirement Management board the authority to increase both employee and employer contribution rates should the plan require to maintain full funding.  There are several other adjustments or levers that can be activated if the plan falls below full funding.  See this comparison chart here:  http://www.akleg.gov/basis/get_documents.asp?session=31&docid=35310

The plan will not add to the current unfunded pension liability.  This is the conclusion reached by the Department of Administration’s actuarial firm.

The bill section highlighted in your e-mail (section 35) is not a nefarious “gotcha” provision, it simply allows current Tier 4 peace officers/fire fighters to leave Tier 4 and buy into the new tier.  It does not require any of those employees to do so, it just gives them the choice.  We expect that some will choose to buy in and some will choose not to.

The state as an employer loses millions of dollars every year through peace officer and fire fighter employees leaving state employment for other states that offer pension retirements.

Other states, primarily western states, recruit in Alaska heavily.  They purposely seek Alaska peace officers and fire fighters that get trained by either the state or the municipal employers.  Thus, Alaska and its municipalities have become a “minor league” system and are paying to train other states’ peace officer and fire fighter workforces.

The loss is lost training dollars invested in the employees–the average training cost per state trooper and correctional officers is $137,000, there roughly 1,350 peace officer and fire fighter state employees.  At a 2% (31 employees) attrition rate that represents almost $5 million a year in lost training dollars.  Or, training that the state has to pay for again because of trained employees leaving state employment.  As an average, $137,000 for training is on the low side.  State troopers incur $190,000 in training per employee and the Department of Transportation’s training for their airport police and fire fighters is about $182,000 per employee.  The actual attrition rate across the state also is much higher than 2%.  The Department of Corrections experiences over a 13% turnover rate per year, or 120 employees.  This loss represents over $14 million in lost training in just one state agency.  Finally, the figures below do not reflect the training dollar losses incurred by the different municipalities with public safety employees.  Thus, the costs represented here are low than what the state as a whole is currently experiencing.

Most importantly the loss of these employees while creating an obvious manpower shortage, also is creating a dangerous experience gap in the police and fire fighting forces in Alaska.  These agencies all report a shortage of employees with 5 or more years experience.

Five years experience is the average time required for these employees to earn their full complement of certifications.  If the state does nothing to address this, the state as a whole will suffer with lesser qualified peace officer and fire fighter workforces statewide.

As a person who spent a career in law enforcement, public safety is very important to me.  This is why I am sponsoring the bill.  Thank you again for reaching out. 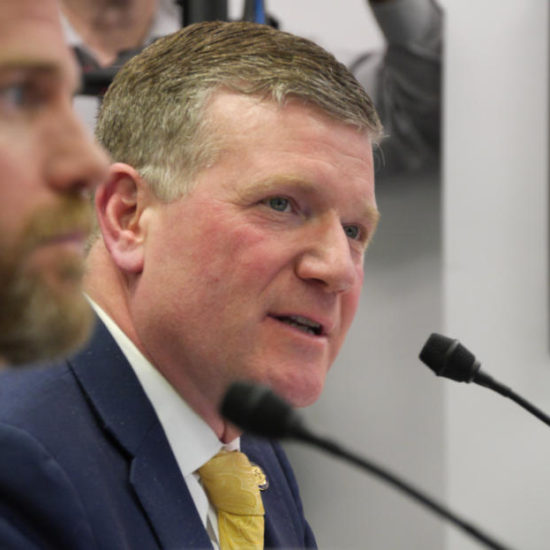