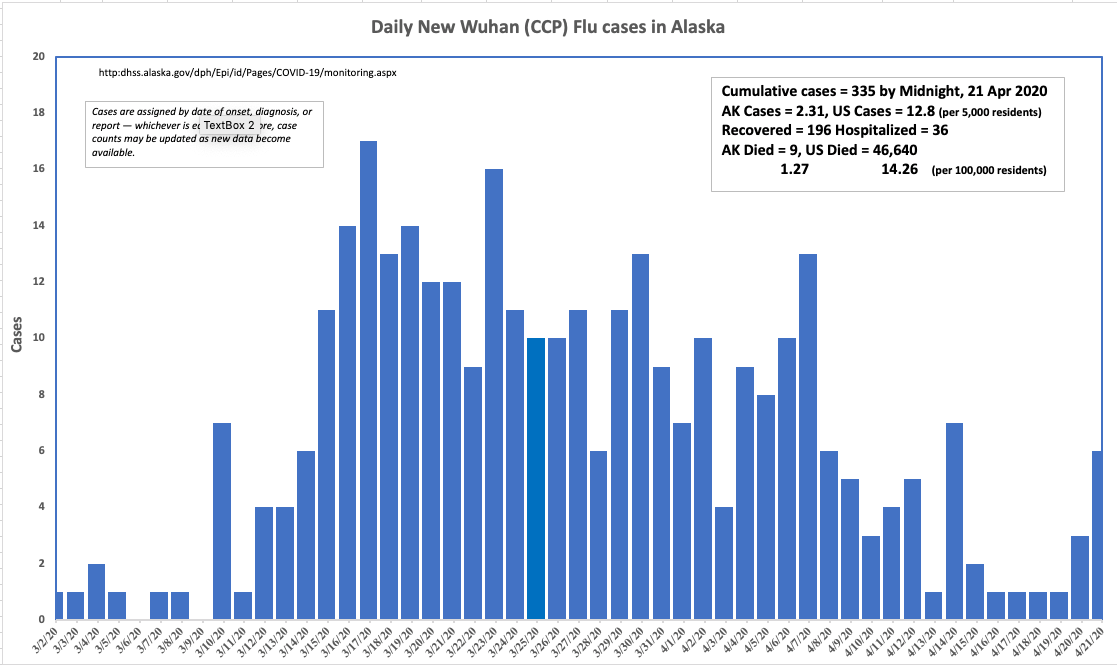 It is not often when you see a proposal from a government as outrageous, tone deaf, clueless, and detached from reality as what Anchorage Mayor Ethan Berkowitz proffered Monday, April 20 to end his economic shutdown of Anchorage.  Both the ADN and Suzanne Downing’s Must Read Alaska (MRAK) articles on the proposal.  You can find your own copy of the document here.

The ADN conveniently disabled comments on the proposal as they have for most of what they published over the last few weeks.  MRAK left her comments open, and they were blistering, something the Mayor and his Assembly ought to pay attention to.

Remember that the ONLY reason we shut down the state was to keep the hospitals from getting overloaded with Wuhan Flu patients, to flatten the curve.  This was based on models which have been off by a factor of 4 – 50 high.  NONE of the models were close to what the virus has actually done.

The ADN tracks current infection numbers in Alaska daily.  Numbers published Weds, April 22 were current as of noon April 21.  You can find them here.

One thing that those of us with military backgrounds learned over the years with varying levels of pain is that no plan survives first contact with the enemy (or reality) intact.  So is it with Ethan’s plan.

For the beginning, Ethan proposes a Phase 1 to begin 14 days after cases begin trending down.  If you look at the ADN data linked above, that clock began ticking somewhere between April 1 – 4.  I’ve seen graphs with the worst day as March 16, a full month ago.  Reopening ANC should have begun last Saturday at its latest.

Ethan then deftly moves the goalposts and demands what he calls “widespread” testing, though he gives no metrics for either what he thinks widespread means, nor does he define precisely what he is testing for.  Active Wuhan infection?  Wuhan antibodies?  Alien abductions?  Something else?

Then he takes a slap at the growing number of ANC residents frustrated with his arbitrary and capricious shutdown and claims calls to reopen “… run(s) counter to science.”  He also attempts to hide behind medical professionals, none of which he either names or quotes.  As with his closure of the bars and restaurants, he has no direct contact with people demanding he reopen Anchorage and likely doesn’t plan any either.

In honor of His Honor, I present one of the best songs about science I know of.  It displays pretty well what sort of science Ethan is actually using.

What rot, and that’s just Phase 1.

Phase 2 will not begin until Phase 1 has been in effect for a full 28 days, a total of 42 days, six solid weeks without recreation and business activity not personally approved by Ethan.  Phase 3 reopens the schools.  Phase 4 requires a vaccine and anti-viral treatment.  Note that anti-viral treatments already exist and are being busily rolled out.  Does that mean we are in Phase 4 already?  As to vaccines, good luck with that, as the common cold is due to 3 – 4 different Corona viruses.  We’ve been working on a vaccine for it for over a half century without success.  OTOH, there are a number of treatments for the common cold that work pretty well.

Ethan appears to base his plan on the notion that if you keep people home, the disease will disappear.  The problem with this is that this is a respiratory virus and will infect a certain number of Alaskans, picking off the most vulnerable or compromised first, which is kind of what respiratory viruses do.  If you keep people home, the spike in the curve that was feared to overload the hospitals won’t happen.  But as you flatten the curve, and the area under that curve (total number of those expected to be infected) remains relatively constant (because you haven’t done anything to address the total number of people who the disease will infect).  The total number of Alaskans expected to get the Wuhan Flu remains roughly the same, which Ethan will use to further extend the shutdown and in turn the not so gentle application of his hot little hands on economic activity here in ANC.  It is Good to be King.

One of the surprises of this disease has been the widespread presence of antibodies in unexpected places.  First story came out of a phlebotomist in Chicago who found Wuhan antibodies in 30 – 50% of the blood samples he tested.  Last weekend, a study out of LA found Wuhan antibodies in 3 – 6% of the population of LA County.  This was 55 times the number of confirmed cases via testing, between 221,000 – 442,000 cases.  Both of these results indicate that the Wuhan Flu or something very close to it was making the rounds in the US months before we thought it was.

And Ethan’s plan is not interested in, nor does it even acknowledge the existence of the current penetration of the virus here in Anchorage or in building herd immunity.  He is neither interested in that possibility nor interested in gathering any data to support or refute the possibility.  So much for his “science.”  Take another look at Thomas Dolby while you let that observation sink in.  I’ll wait.

It is much too fun to pick and choose which businesses, sports, and other activities we here in Anchorage can participate in and dictate what we have to do while participating.  And if he can stretch out his control of our daily lives until he leaves office next year, so much the better.  Like I said earlier, it is Good to be King, though I think this will backfire on Ethan and his Assembly sooner rather than later.

If Ethan gets away with this, he will strangle small business in this town for a very long time, which is going to do significant damage to his tax base, the one whose largess he and his Assembly have so much fun spending.  It is up to us to reopen Anchorage for business.  Today is a great time to start and fast-forward through Ethan’s 4 Phases by the end of the month.