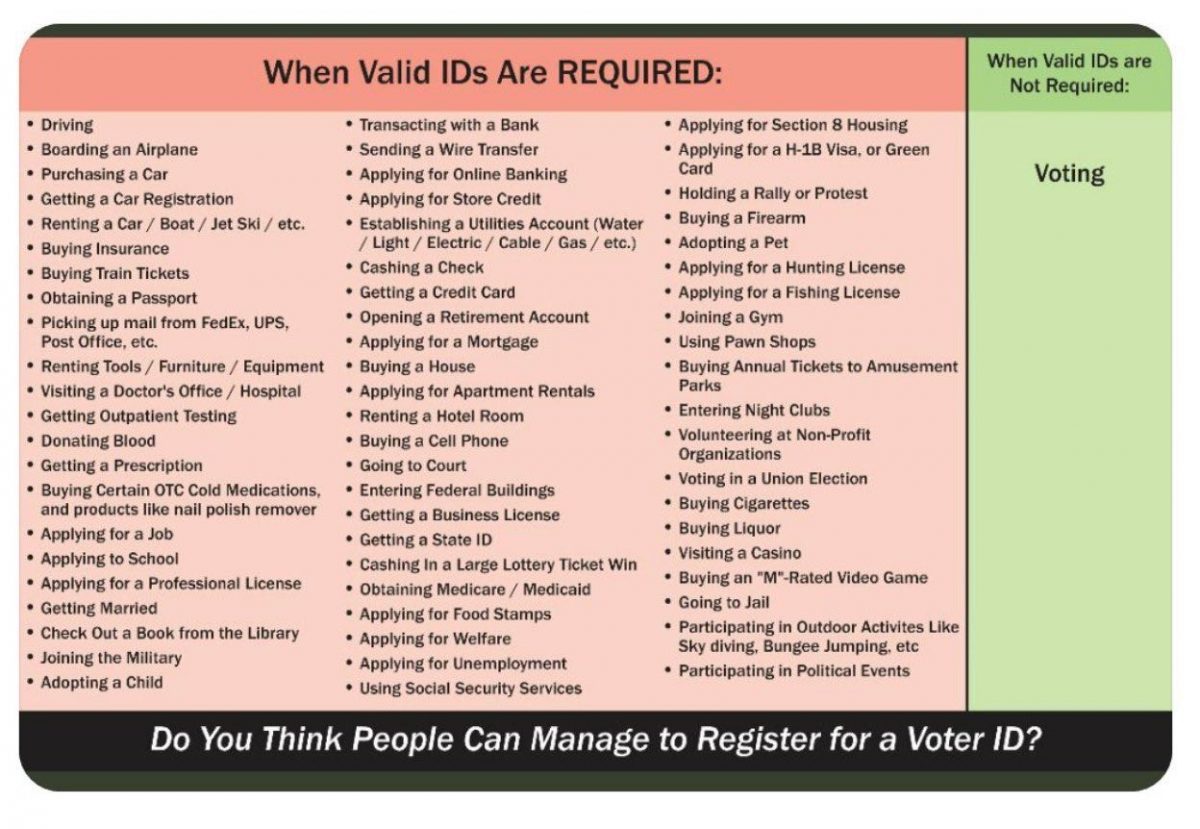 Topic for today is a discussion of the requirement for voting in Alaskan elections.

This discussion is triggered (great word, that) by Senator Mike Shower’s SB39 election reform legislation working its way through the legislature.  And triggered is an accurate term based on multiple apoplectic op-eds we’ve seen in the Binkley fish wrapper since Shower introduced it.  Commenters are even more worked up, tossing the epithets “racist” and “Nazi” early and often like so many ineffective hand grenades.

Their biggest problem seems to be a requirement for an actual photo ID for voting, likely one compliant with the federal Real ID requirements.  Supporters believe that proving who you are is a basic piece of securing the vote.  Opponents believe the requirement is at a minimum racist because minorities here in Alaska are too infantile to figure out how to get an ID.  Of course, these very same grown-up infants need the very same photo IDs to do things like banking, flying, and purchasing liquor.

Now that the opening bids are identified, it might be a good idea to review actual things every citizen does in their daily lives that require a photo ID.  With that in mind, I offer the following image.  It was grabbed from an online source.  I have done no verification of everything in the list.  Not all of these requirements take place in Alaska.  OTOH, I have lived at least half the entries at one time or another here in Alaska.  As with anything else, of course, your mileage may vary.

It is quite a list.  With their argument against IDs for voting, the anti-ID folks are telling us that every single requirement for an ID to do something else is by definition ALSO racist.  This includes various corporations, airlines and governments that require photo IDs for every single thing they do.  Methinks their concerns are overblown.

Now, I do agree that getting a Real ID or Passport is a moderate pain in the backside and costs some time, effort, and money.  There should probably be a provision in the proposed legislation to assist an applicant, whether this assistance covers costs or simply provides navigation through the process.  As long as the outcome is a single ID to a single citizen, I’m good.

Photo IDs are neither racist nor voter suppression.  Having one is an integral part of living our daily lives.  As such, requiring one for voting is neither unreasonable nor a difficult hurdle for adults to pass.  Perhaps the opposition is more interested in having more election fraud than less.